Okay, CUTEST IDEA EVER! "Chocolate Covered Cherry Mice!" Way cool and way easy to make. They're the hit of the party every time! 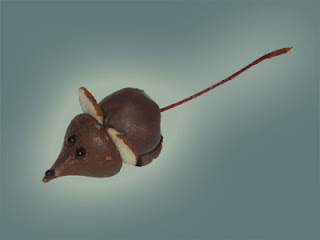 DIRECTIONS:
-Drain maraschino cherries (leave stems attached for the tails).
-Dip cherries, one at a time, in melted chocolate (can melt chocolate chips in a double boiler or the microwave).
-Place on waxed paper-lined pan with stem pointing to the side. Wait a minute for chocolate to set slightly and then stick a Hershey's Kiss on the front of the cherry. Hold them together a few seconds until the chocolate cools enough to stay when you let go.
-Place two slivered almonds for ears between body and head before the chocolate cools completely (can use flattened raisins if allergic to nuts).
-Cool in fridge after all are finished.
-Can add dots of frosting or gel for the eyes and nose.

NOTE: If you have any melted chocolate left over after all the mice are formed, throw some whole nuts or pretzels or firm berries into the chocolate. Gently stir to cover them with the chocolate before placing them on waxed paper and then in the fridge for an extra chocolate-covered treat. 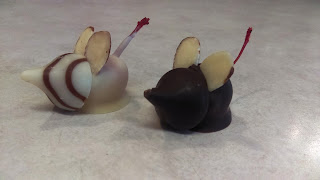 My husband and I attended a medieval fair, and we were enticed by the sight of a huge turkey leg being cooked over an enormous grill. The sumptuous smell overwhelmed our senses and the meat, browned to perfection, appeared juicy and tender. Our stomachs growled impatiently for our mouths to dive in. But after paying the ten dollars for the leg the first bite should have been a moment of sheer enjoyment. To our surprise it was laced with disappointment. The meat contained NO SEASONING whatsoever and tasted, well, plain. At least they could have SALTED it. When I asked the vendors why they didn’t season the meat, they replied, “They didn’t have many spices in the middle ages and ate mostly bland foods.” POPPYCOCK, I wanted to say as I realized their view mirrored the common misconception that medieval fare was dull, rustic, boring, sometimes ill-hygienic, and to put it simply . . . BLAND. This belief is vastly untrue.

A great variety of herbs, spices, condiments and sweeteners were accessible to the people of medieval England (though many were costly and only saw an upper-class table). Numerous fruits, vegetables, meats, dairy products, grains and drink helped make an abundant assortment to choose from. The diverse foods consumed by differing classes were mostly due to affordability. People with little or no money had to settle on cheaper, more available foods such as beans, simple breads, fruits and vegetables in their seasons and the worst cuts of meat. The wealthier classes could afford to partake of more varied and expensive fare. However, this article treats the availability of foods throughout England, regardless of class, price or commonality.

England produced ample food (excluding times of drought and famine) from personal and public gardens, orchards, grain fields and livestock, but it wasn’t uncommon to import provisions during off seasons or in other times of need. Those who couldn’t afford expensive imported victuals, or who chose a more frugal lifestyle, lived off their preserved foods until seasons brought fresh fare again. Some imported foods were rice, Middle Eastern and Asian spices, tropical fruits (though this was tricky with long voyages chancing rot along the way), foreign beers and wines (though England had PLENTY of their own beers, ales and wines *smile*).

The devises used to mill and process grains and other foods may seem rudimentary to our day, but they were, in fact, quite advanced and ingenious for the time and worked quite well. Drying, salting, smoking, fermenting, pickling and preserving with sugar were all essential for short- and long-term food storage. Medieval refrigeration took the form of larders, cold cellars (below ground pantries), insulating with hay and straw and utilizing snow during the winter.

Below were some foods available in medieval England, though the list is certainly not exclusive or complete. It simply gives one the idea that there was enough to choose from to make meals anything but bland or boring.

Vegetables: Cabbage, pumpkins and other squash, carrots, onions, turnips, beets, peas, leeks, spinach and other greens, parsley, garlic, (potatoes, though seen in records in the 1500s, may have been introduced into England sooner than that)

Drinks: fresh fruit juices (not all were fermented and alcoholic, especially if the fruits were in season), hydromel (water and honey), beer, wine, ale, mead, water, milk, almond milk (not a dairy, was made of ground almonds and water, it was a staple for most as it kept longer than cows milk and had a wider availability

Food consumption is essential for the endurance of human life. Since the beginning of time people have experimented with spices, herbs and cooking techniques in order to make eating an enjoyable experience, not just a means for survival. So I say to all medieval fair peddlers of turkey legs and other such victuals, “SALT your food, use some SPICES, and HERB up your fare!” You won’t be compromising historical accuracy, for in fact you’ll be staying true to the past. 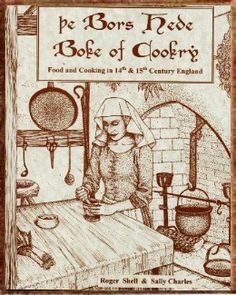