Guest-hosting book launch for A SUITABLE AFFAIR by Erica Taylor on June 5! 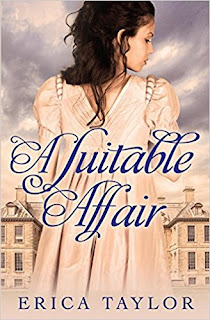 A SUITABLE AFFAIR is coming to stores and e-retailers June 6th and Erica has invited fourteen other authors, myself included, for THREE DAYS of fun! Join Erica and her guest authors from June 4th through the 6th for author spotlights, live readings, giveaways (free stuff!) and more to celebrate the release of A SUITABLE AFFAIR.

Erica has scheduled me for a 75-minute block on her Facebook Launch Event page on June 5th from 4:30-5:45 pm MST (5:30-6:45 pm CST). I'll be posting and responding to comments about Shadows of Valor, Perils of Wrath, my history with writing them, questions and answers about my writing, and the music I composed for the stories. I'll be putting up medieval-related posts such as history, facts, tidbits, and of course RECIPES (I love recipes)! I'll be giving away a copy of the reissued Shadows of Valor to one lucky winner of a "Youtube post share" that I'll announce at the beginning of my block. It will be a lot of fun. Visit the launch party site before and after my block to engage with other wonderful authors.


A SUITABLE AFFAIR blurb:
Despite being beautiful and wealthy, Lady Susanna Macalister’s marriage prospects are rather lacking. Unwilling to let an opportunity pass her by, she decides a loveless marriage is better than spinsterhood, as it will allow her to continue her charities. The life of Ian Carlisle, the Earl of Westcott, has been overshadowed by darkness and guilt for the past decade. Having abandoned his family when he was eighteen, Ian’s position within a secret division of the government has provided him an escape from the guilt he feels over the death of his sister. When the Earl's horse almost tramples Susanna in the middle of Hyde Park, Ian embraces the chance encounter as a possibility for redemption, for Susanna’s soon-to-be fiancé is the man Ian holds responsible for the death of his sister. Can this damaged lord hope to absolve the guilt he feels for failing his beloved sister by saving this vibrant, and unsuspecting lady from a similar fate? And will this charity-minded well-bred lady, who is not the perfectly bound book as Ian assumes, be willing to take a chance on the unstable earl, when something more dignified and permanent is well within reach?

Learn more about A SUITABLE AFFAIR at Erica's website

ABOUT ERICA TAYLOR
Erica Taylor is a mother of two and military wife married to her high school sweetheart. Raised in the mountains of Colorado, she holds a BA in History from the University of Colorado. Erica has been writing stories since she can remember, picked up her first romance novel while on a beach vacation as a teenager, and fell in love with falling in love, with sexy heroes and the feisty women who challenge their lives. A self-confessed geek, Erica loves anything Harry Potter, Doctor Who or Star Wars, can spend hours in Target with a Starbucks, and truly believes a cat makes a home. Currently living in South Africa, Erica can often be found writing during soccer practice or piano lessons and is not afraid to let dinner burn if it means getting the story out of her head.
www.EricaTaylorAuthor.com
Twitter: @EricaTayor

Posted by Elsie Park at 8:21 PM No comments: