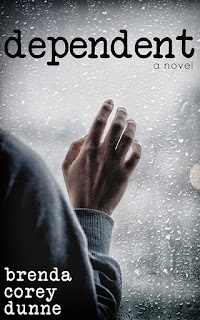 I LOVE this new cover for the re-release of Brenda's novel DEPENDANT!

Blurb
When forty-five year old Ellen Michaels looses her husband to a tragic military accident, she is left in a world of grey. For twenty-five years her life has been dictated by the ubiquitous They—the military establishment that has stolen her hopes, dreams, and innocence and now in mere months will take away her home. She is left with nothing to hold on to but memories and guilt and an awful secret that has held her in its grip since she was nineteen. Written with honesty and grace, Dependent deals head on with real-life issues facing women in military communities today: loss, loneliness, frequent moves, the culture of rank and the specter of sexual assault. It presents a heartfelt view of the sacrifice and strength of the often invisible support behind the uniform.

About the Author
Brenda Corey Dunne grew up in rural New Brunswick, Canada. She originally trained as a physiotherapist and worked several years as an officer in the Royal Canadian Air Force before meeting her Air Force pilot husband and taking her release. She has two other published novels, SKIN (2016) and TREASURE IN THE FLAME (2012). Brenda is represented by Frances Black of Literary Counsel. She currently resides in the Washington, DC area, but home is wherever the RCAF sends her hubby. When not writing, working or taxiing her three children she can be found either in the garden or on the beach with a book in one hand and a very, very large coffee in the other. Find her at Brendacoreydunne.blogspot.ca or @overdunne on Twitter.
Posted by Elsie Park at 10:58 AM No comments: