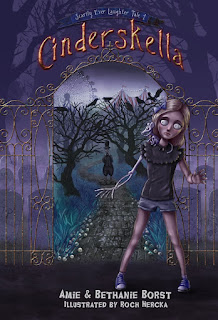 It's been quite a journey for mother/daughter author team Amie and Bethanie Borst as they've worked endlessly to breathe new life into Cinderskella's new cover (and what an awesome cover it is), illustrations (I've been told they're amazing), and even the story itself after leaving Jolly Fish Press in 2016. And the dynamic duo is super stoked with the changes! Can't wait to see what they do with the other books in their series.

Cinderskella is due to re-release in February 2018, so mark your calendars!

Blurb:
It’s not just monsters that go bump in the night. Sometimes it’s skeleton-girls, too. Cindy might appear to be your average twelve year old, but since her mother’s death she has a secret. Every night she faces a horrible, terrible curse; one that turns her into a skeleton. Yup, a boney, white skeleton. As if that wasn’t bad enough, Cindy’s own father is scared of her. Plus she has an evil stepmother who makes her do crazy chores, some of them with a toothbrush. And then there’s the wild dog with intentions of making Cindy into his midnight snack. As if all that wasn’t bad enough, the Spring Fling dance is fast approaching and Ethan, the cutest boy in sixth grade, doesn’t seem to know she exists. Cindy doesn’t think letting Ethan know she’s a cursed skeleton-girl is the best way to introduce herself. Determined to break the curse, Cindy travels to the Underworld where things aren’t quite what they seem, including Mr. Death, the strange and creepy Undertaker. With a jar of pickled pig’s feet, a wacky fortuneteller, and an cranky skeleton mouse, Cindy is afraid this curse has really gotten under her skin. 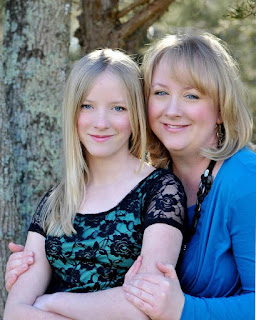 Amie and Bethanie Bio’s:
Amie Borst loves glitter, unicorns, and chocolate. But not at the same time. That would be weird. She’s a PAL member of the SCBWI as well as a founding and contributing member of The Mixed-Up Files…of Middle-Grade Authors, a group blog dedicated to middle-grade books. Amie lives in Virginia with her three beautiful daughters, her handsome husband, and two cute dogs named Lily and Maggie. She wishes she could travel the world in a hot pink elevator but for now, her minivan will have to do.

Bethanie Borst is 17 and the author of three books. When she was only 10 years old, she wrote her first book, Cinderskella. She enjoys reading, writing, and STEM. Bethanie is fluent in both sarcasm and humor and is prepared for the zombie apocalypse and/or spontaneous combustion of the world. Because, let’s face it, both of those things are totally realistic.

Posted by Elsie Park at 6:55 AM No comments: 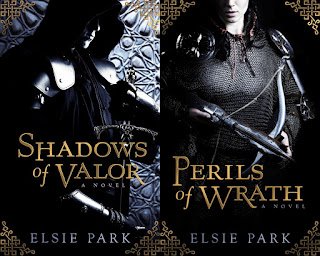 Posted by Elsie Park at 8:16 PM No comments: