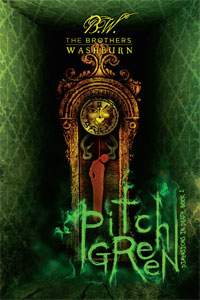 In this story, young children have turned up missing without a trace for over 50 years in Trona. Cal and Camm, friends since childhood, set out to discover why. Their investigation leads them to an abandoned mansion next to the chemical plant. But there's more to the old building than its dark halls. A sinister presence inhabits the place and has set it's sights on the interloping duo as they cross into its territory.

Pitch Green, a young adult suspense/horror by The BrothersWashburn (published by Jolly Fish Press) is a 277-page mystery that reminded me of the good old Hardy Boys (a childhood favorite of mine), though with a little more blood and guts. I finished the story in two days. It would have been one had I started it earlier in the day and not had chores and children to look after *smile*. The book gripped me from the first chapter and continued to hold my eager interest from page to page until the bitter end.

I liked the characters because they were realistic and made their decisions with logical and intelligent thought (something I really appreciate). It was neat to see the small desert town of Trona, California, through the eyes of the characters (and thus though the eyes of the authors, as well, since they grew up there). Because of this story, I can see Trona, a location previously unknown and uninteresting to most, becoming the next “fascinating landmark to visit” on vacation routes through California to see where this creepy story took place.

Pitch Green is a good read for both young adults and adults, especially for those who enjoy a great suspenseful mystery without major bad language and sex, though "son of a b----" appears twice in the story, and there is some violence and blood as expected from any story in the horror genre.

Well done, Berk and Andy Washburn! I await your second book with bated breath. And I love the picture on the back cover. Your expressions seem to say, “We dare you to read our story in the middle of the night when you’re all alone.” *big grin* 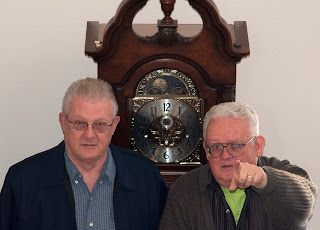 Pitch Green is available to order at any bookstore, online and on e-readers.

Note: There are scenes with sculls, rotting flesh, blood, broken bones and torn limbs in this story, but as Pitch Green is a young adult novel, the images are tastefully reined in to give the reader a sense of the action and danger without overdoing the gruesome factor.
Posted by Elsie Park at 4:39 PM 2 comments:

Composing a Musical Score for SHADOWS OF VALOR Book Trailer

I mentioned some months ago that my publisher asked if I would take some of the music in my story, Shadows of Valor, and compile a 2-minute musical score for my book trailer. I had never done anything beyond writing music for piano, so I was in for an education about other instruments and how well they went together (or how they didn’t go together in some instances). Thank goodness my Finale Print Music computer program had the option to add different instruments to the score and to separate them out into different staffs, keeping everything in order. I fiddled with the violin, cello, contra bass strings, several drums, flute, recorder, piano of course, and the acoustic guitar.

Through the help of my way awesome and very patient brother-in-law, Michael Park, I learned how to save my files into “midi” form so he could easily transfer them into his amazing program that contained hundreds of instruments and great mixing capabilities. Through many hours of work and using up Mike and his wife’s free time, we got the first version ready for approval, sending it off to Christopher Loke at Jolly Fish Press (my publisher). Well, he had some issues with a few notes, the speed and instrument choices not being quite right and not synchronizing with what Chris had in mind.

Soooo, back to the drawing board.

We slowed things down a bit, took out some instruments, added others, even put in some choir voices, a tambourine and jazzed up the drums a bit. We sent it to Chris and . . . yeah . . . not a go this time either. We’d added TOO MUCH “fluff” and needed to drastically simply it. The problem with having a TON of instruments at your fingertips is that it’s too easy to go crazy and use too many of them *smile*.

To make sure we caught the vision this time, Chris played music for me over the phone and sent me samples on my e-mail, allowing me hear the particular sounds he envisioned in his head. He even hummed, awed, and sang samples until I finally felt we were on the same page.

With renewed confidence that I hadn’t gotten in over my head in this new venture, my brother-in-law and I began working on the third version. We cut the instruments down to the bare minimum, abridging to the point of the music sounding uncomplicated and almost raw in its simplicity. The 2-minute arrangement had two parts, the first representing my female heroine in a melodic tune taken from my song “May’s Good Day” and brought out by only right treble clef piano and bass clef cello. The second part, taken from my song “One Brave Knight” represents my male hero with a darker, almost war-like refrain that’s beat out with the cello, contra bass strings, bass drum and timpani drum.

With bated breath, I sent this third version to Chris and waited on his phone call, which, with the previous versions, had come within minutes of his receiving it. But this time, no call, no e-mail response . . . nothing! CRAP! Was he completely fed up with my incompetence that he didn’t call back because he didn’t know what to tell me this time? Had he not received the e-mail with attached mp3? Was he just at lunch? Was he super busy and didn’t have time to respond yet (the most likely of all the possibilities). I tried doing other things, checking my e-mail for a response every 30 seconds, but when four hours or so went by without anything, I decided to call, Chris. I HAD TO KNOW what he thought of this version.

Well, turned out he was way busy and even in a meeting at the time I called, but awesome boss that he is, he answered my call instead of making me wait until later when he actually had the time to talk *smile*.

And the verdict . . . THE ARRANGEMENT WAS JUST WHAT HE WANTED!!! YEA!!! Aside from a few minor mixing issues to clean up, it was a go. I WAS SO RELIEVED!!! We cleaned up the score and saved it to a “wav” format before sending the final version to Chris.

I can’t WAIT to see how my music goes with the visual trailer.

Shadows of Valor will be released and also be available on e-readers September 7, 2013!

This is the simple piano version of my score (click to enlarge): 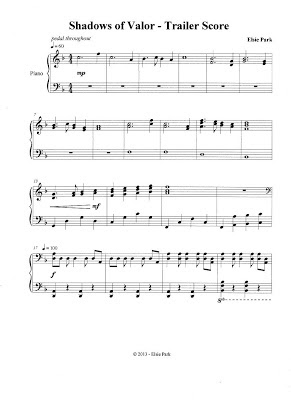 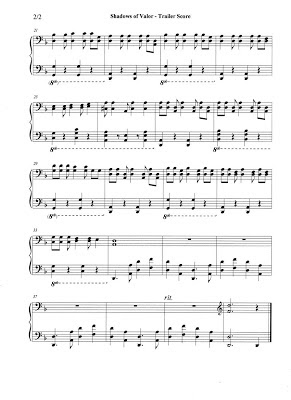 My Review of Adrienne Monson's "Dissension"

Dissension by Adrienne Monson, book one in The Blood Inheritance trilogy.


Though not for those squeamish about blood, Dissension takes the reader on a journey unlike any other vampire story I've heard. This is an interesting and fast-paced telling of an age-old war between vampires and immortals which commenced from the day of their origin thousands of years before. A difficult romance between two main characters who hope for unification accompanies the story as an underlying dilemma to overcome. Prophecy is told of a child who will affect the war as each division races to find the child first, each hoping to utilize him for their own purposes.

Monson executes her scenes with an effective hand, allowing the reader to picture exactly what needs to be seen and experienced. Dissension introduces an interesting take on vampire and immortal origins that no other book or movie have ever touched as far as I know (though I’m no authority on vampire lore). Monson establishes an interesting and intricate romance between her main characters, adding an intriguing twist at the end concerning a particular association. Monson also integrates multicultural characters throughout the book, appealing to readers of all ethnicities.

There’s no harsh language in her story (though I think “hell” or “damn” might have appeared once or twice). There are, however, quite a few violent images, including plenty of blood, breaking bones and fighting with knives and guns, as the aggressive and even sadistic lives of the vampires influence the content.

Overall, the story is fast-paced and keeps the reader interested to the end. Monson wraps up many events in the first book, while others remain open, leaving the reader curious about how the next two books will continue the war between vampires and immortals. How will the prophecy child appear and what role will he play in the entire event?

NOTE: This book is not for young readers or adults sensitive to brutal imagery as there is a violent overtone about the book (similar to what one might see and hear on CSI shows). Though Monson doesn't describe explicitly, she insinuates about sadistic sex, torture, murder and even the disturbing implication of vampires feeding on a mother and her newborn babe, all of which make this a read one for a strong and mature mind.

Go to the Jolly Fish Press site for links on where to purchase Dissension.
Posted by Elsie Park at 2:26 PM 3 comments:

I was first introduced to the Scotch egg at a Scottish Festival in Payson, Utah some years ago, and I have been hooked on them ever since. Although the history and year of origin are debated and obscure (circa 1700s England), there's no disputing that Scotch eggs are a delightful and savory dish. A Scotch egg consists of a hard-boiled egg (with shell removed) wrapped completely in raw sausage meat and then rolled in fine bread crumbs before being deep fried or baked. Here is a simple recipe for baked Scotch eggs. 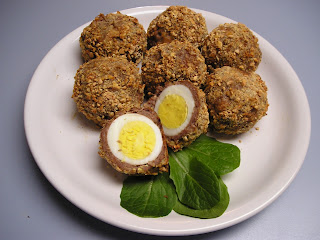 Directions
Divide sausage (or ground turkey) into 8 equal portions. Pat out each portion to about 1/8 to 1/4-inch thick rounds. Wrap sausage completely around each hard-boiled egg. Seal by pressing meat around the egg. Dip meat-covered eggs in beaten egg, and then roll to coat in breadcrumbs (or cracker crumbs). Place on baking tray and bake in oven at 375 degrees Fahrenheit (190 Celsius) for about 25-30 minutes (45 minutes if there are a lot in the pan) until outside is lightly browned and meat is done inside.

Note - although the sausage and egg yolk reheats well in the microwave after freezing, the egg white tends to separate and have a rubbery texture near inedible. They are best eaten fresh from the oven the first time. :)
Posted by Elsie Park at 1:10 AM 8 comments: