I like having fun with food during the holidays. Halloween has so many possibilities. I experimented with my regular baked apple dumplings, wrapping them in extra strips of dough to create the "mummy" look. I had placed raisins on them for eyes before baking, but my husband said they didn't look as good as the candy eyes from the store, so after they were baked, I removed (and ate) the raisins and placed the candy eyes on the mummies. I had leftover pie crust dough so I made a mini mummy blackberry pie, too (pictured below). I managed to get a few pictures of them before my husband and girls gobbled the mummies up. Here's the recipe for baked apple dumpling mummies:

Mix flour and salt in medium bowl then cut cold butter into it using pastry cutter until it resembles find crumbs. Add water and mix and mash with a fork until a nice dough forms. Cover and set aside.

Apple Dumplings:
3 medium apples of choice (I like to use Yellow Delicious, Gala, or Fuji)
Mixture of ~1/4 cup sugar and ~ 1-2 teaspoons cinnamon to taste
Raisins or candy eyes (usually found in the baking section of the store by the sprinkles)

Divide pie crust dough into three equal portions. Roll separate portions out on lightly-floured surface to 1/8th-inch thickness. Peel and core apples. Place one apple in center of each dough section. Fill each apple center cavity to the top with cinnamon/sugar mixture. Wrap each apple up in the dough, overlapping edges just enough to pinch together and seal. Tear off excess dough and roll out again to 1/8th-inch thickness. Cut into strips with knife or pizza cutter and lightly wrap around your apple dumpling, making your mummy.

If using raisins for the eyes, you may place them into the dough before baking (or after if you prefer), pushing them in so they fit securely. If using candy eyes, do not place on dumplings until after they are baked (I don't know how candy eyes fair in hot ovens). Place dumplings in baking dish. Bake at 350 degrees Fahrenheit for an hour until crust starts to look golden on top. Remove from oven. Place apples on individual plates/bowls and drizzle with the apple syrup that came out of the dumplings during baking and pooled in the bottom of the pan. Serve warm with ice cream or whipped cream if desired. Enjoy! 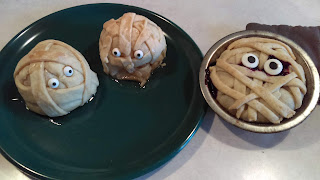 Other things we did this year: 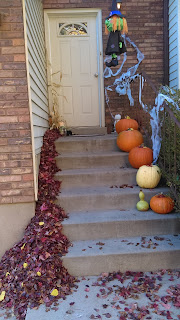 HAPPY HALLOWEEN FROM OUR HOUSE TO YOURS!